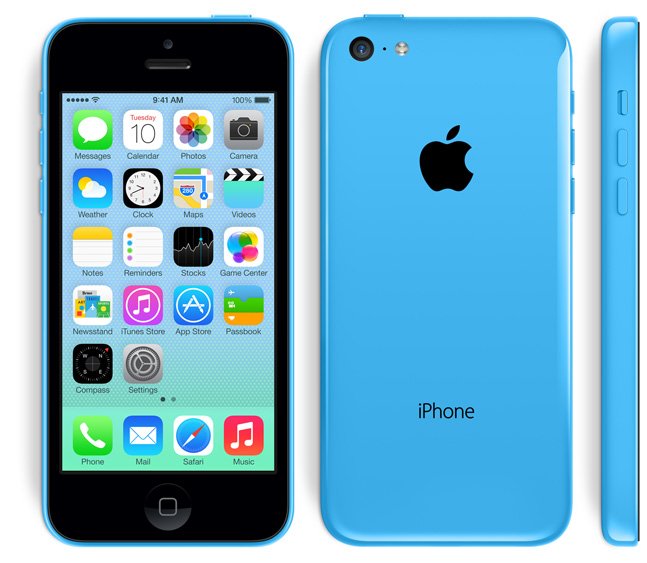 iPhone 5C is a phone that goes into history. The reason for this is that it's the first budget iPhone. Apple has stubbornly refusedfor a long timeto meet the demands of the market, but in the end the company agreed. iPhone 5C was announced along with the new iPhone 5S premium phone. This phone is for those who can not afford the iPhone 5S. iPhone 5C is a smartphone which can meet the characteristics of the current model iPhone 5S. Why is that? Because the "budget" iPhone is largely identical to the iPhone 5! iPhone 5C comes with the slogan "more fun, more colors", as a result of offering iPhone 5C in several colors, which is really a precedent.

As we said, the iPhone 5C is very similar to iPhone 5. Below the surface is appealing A6 processor taken from iPhone 5. On the surface, its place was taken by Retina display with a standard 4 inches and a resolution of 1136 x 640 pixels.

On the back of the phone is well-known 8MP camera with LED flash. On the front lies the secondary camera of 1.9MP. You must be wondering where is the difference between the two phones!? The answer is in the new iOS 7 operating system and a stronger battery that iPhone 5C owns.

iPhone 5C comes to be what we expected. The body of the phone is made of quality plastic, and the structure of the device is reinforced with steel. iPhone 5C is offered in several colors: yellow, red, green, blue and white. The Apple says that these colors were chosen because of the same color scheme in the new OS 7. This design gives a new and positive way in the fight against major competitors : HTC One Mini and Samsung Galaxy S4 Mini.

iPhone 5C has dimensions of 24.4 x 59.2 x 8.97 mm and weighs of 132 grams. It means it is something stockier and heavier than the original iPhone 5, which is due to larger battery that iPhone 5C has. The battery provides approximately 10 hours of talk time over 3G networks or 250 hours in standby mode.

Cheap iPhone uses the iSight camera of 8MP with LED flash, which was taken over from the iPhone 5. Little progress is seen in secondary camera that is claimed to work better in low light conditions. It has 1.2 MP and is able to make 720p video.

It is interesting that the iPhone 5C is going on sale from 20th August (only 10 days after the presentation). But, the more interesting is its price, which, according to initial reports, is around $ 550 (no contract obligation) for a model with 16GB of memory. The sale will start in the first 10 selected markets, while later it will cover over 100 countries and 270 carriers.

"Cheap iPhone" withspecification similar to iPhone 5has finally arrived. Several available colours and good price is certainly good news for those who cannot afford to buy the premium iPhone 5S, but want to stay faithful to Apple.